We Experienced it, And made that CHANGE . WE ARE THE CHANGE !

The beginning of this program, we were all grouchy and always wanted to stay home or go to the beach or what not. But as each day goes by, we increase more knowledge, intelligence, and love for our community. It build character in most of us and became leaders of our own. This journey was absolutely a first time for all of us and a great start. It was a challenge for such young teenagers to spend their summer in school and to wake up every morning, however, the field trips and work they do each day motivated to keep going and to continue this adventure. 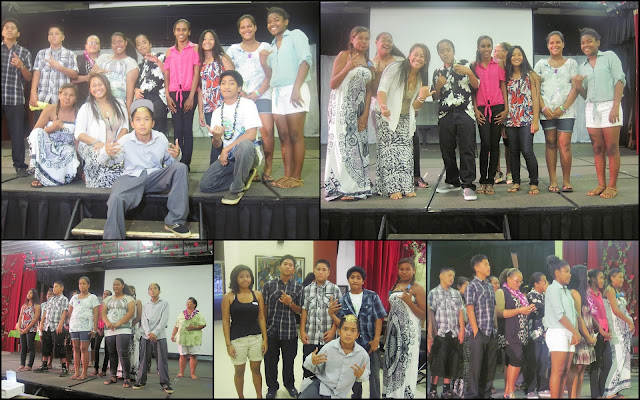 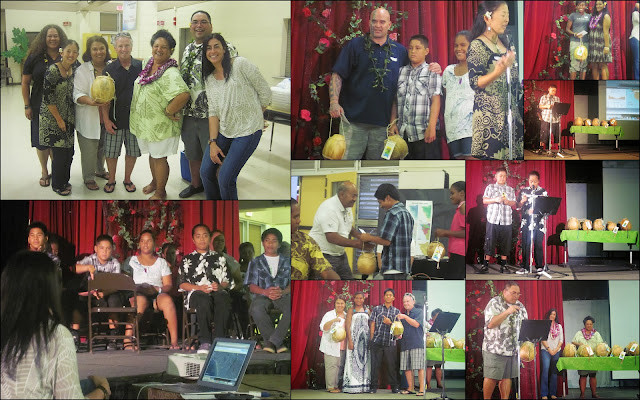 Posted by Unknown at 4:49 AM No comments:

Ka Papa Lo'i o Kānewai is a cultural garden center for Hawai'inuiākea school of Hawaiian Knowledge at the University of Hawaii at Manoa. It's a  very unique resource for the University and the surrounding community. This Kanewai sustains a absolute fine collection of Taro and shares it's resources with the community. The Kanewai provides cultural and educational opportunities for students and the community in General, just by promoting the Hawaiian Language. There was also the stream which was very beautiful and peaceful, it showed such potential and love the students of Hawai'i has given to this inspirational place. It was a great piece of art and absolutely creative. We enjoyed every part of it. Also the Hale, it was very relaxing. The campus itself was stimulating and gifted with all sorts of art or paintings and sculptures made from such extraordinary people back then. It's a huge and massive which the students could not believe but it was interesting and fascinating. We all can't wait to graduate and attend the University of Hawaii In Manoa :) 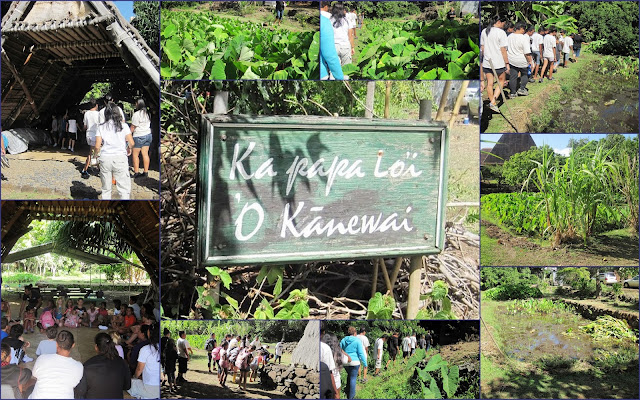 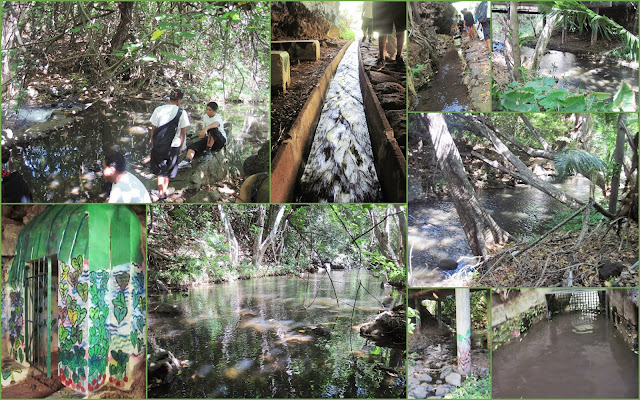 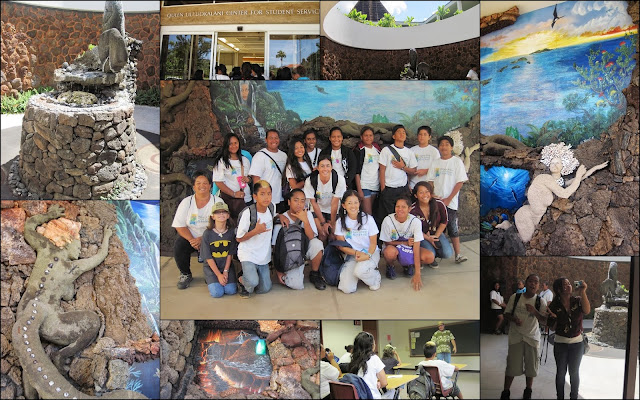 PVT Land Company, Ltd. Operates PVT Landfill in Nanakuli which is a licensed construction & demolition material solid waste landfill.  Operating the Landfill, PVT Land Company is licensed to accept asbestos-containing material and petroleum contaminated soil.  They have 7 layers and are all useful for the landfill. We got to see the actual landfill still in the process of making which was very elegant and impressive but sure is a lot of work. It was a huge amount of space being made. Luckily, Dr.Yamamoto gave us a bus tour and explained to us all about the landfill and how much work is put into it. There are massive trucks coming in daily that are weighed before coming in. 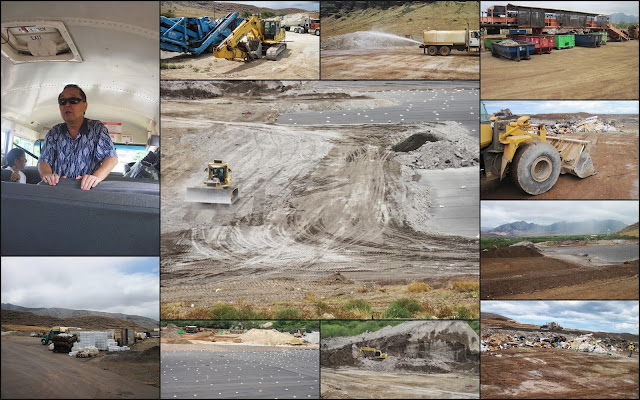 Posted by Unknown at 4:39 PM No comments:

Ever wonder where all your waste is going?

HPOWER stands for Honolulu Program of Waste Energy Recovery thats located in Kapolei. The facility serves the municipal waste disposal needs of more than 850,000 residents and more than six million visitors a year. The facility processes up to 3,000 tons per day of solid waste which creates or generates up to 90 megawatts of energy for the Hawaiian electric company. They also recycle steel and aluminum alloy. It's very massive but quite dangerous if your not wearing a hard safety cap or goggles. It was actually cool and unique of how their system works, and we realized how much we throw away each day. 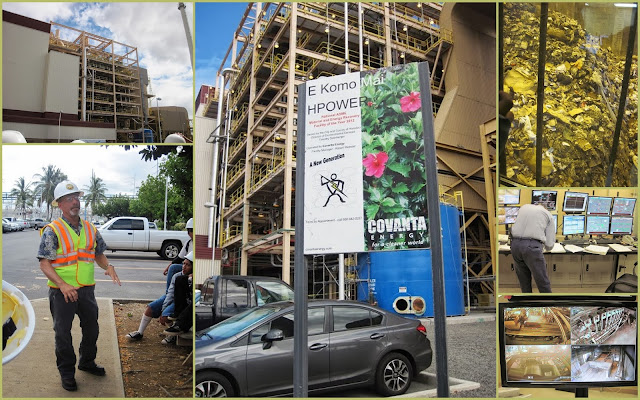 Posted by Unknown at 7:31 PM No comments:

Ma'o Farm is a Non-Profit organization in rural Lualualei Valley and they provide tasty vegetables to local consumers and also offer career direction and leadership training to Oahu's Youth. These interns are from ages 18-24 and work the farm 3 times a week while attending Leeward Community College. Our adviser for the day was Terry Langley and she gave us a tour of the whole farm and the spot they rented. All of this farm work and crops are done by the hands of the interns and farmers and are packaged and delivered as well. It's quite a useful process or system that should expand. 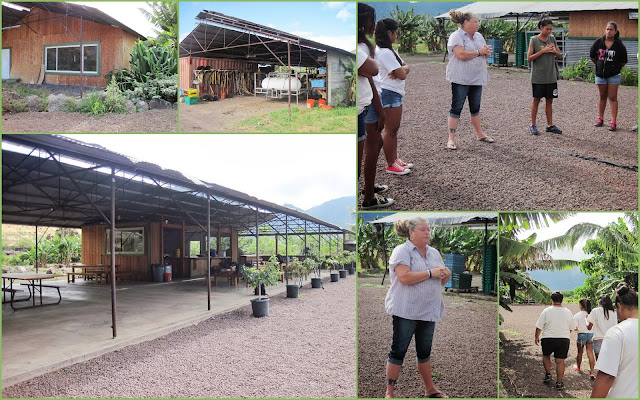 Aunty Terry showed us all of their actual crops that they have planted there. It was a first time experience for most of to see an actual lettuce or "Dino Kale" and other types of Kale growing or sticking out from the ground unlike being in plastic bags in stores. It was fascinating seeing how these grow and how easier it is. Also how these are being made to provide for stores like Foodland and Organic stores. 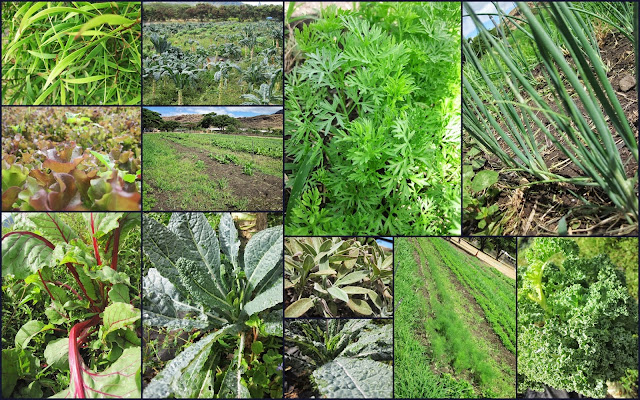 We got to pull out some weeds that were surrounding the Brasicus. These are being watered Over head instead of under. There were also Spiny Amaranths that were very "SPINY". But we managed to pull it out anyways. The farmers do this pretty much everyday. 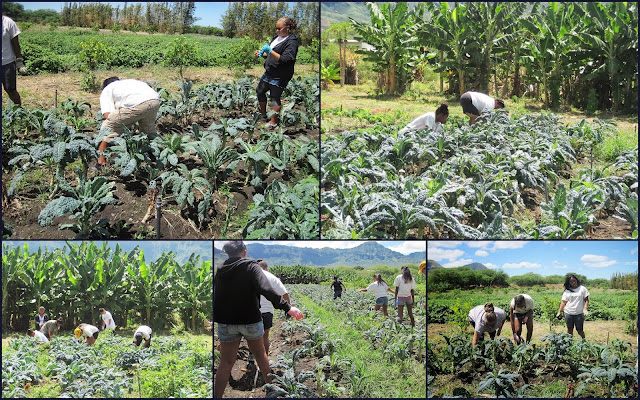 We made ourselves a snack with Aunty Terry which was Sassy Salad. We all made our own dressing and ate it with our Sassy salad. Our other activity was to actually make organic PIZZA's ! Every group had something to do .
Do the same process but with DESSERTS. ( Banana, Mango Juice, Pineapples)

It was DELICIOUS and ONO, everybody agreed that it was better than Hawaii's Best Pizza, Pizza Hut. It was very healthy and tasty. A great activity to do together and were very thankful to Aunty Terry and especially Ma'o farm for having us and sharing their experience and teaching us such convenient and cool information. Our Weather was Very bright and Shiny and Enjoyable. Mahalo Nui Loa. 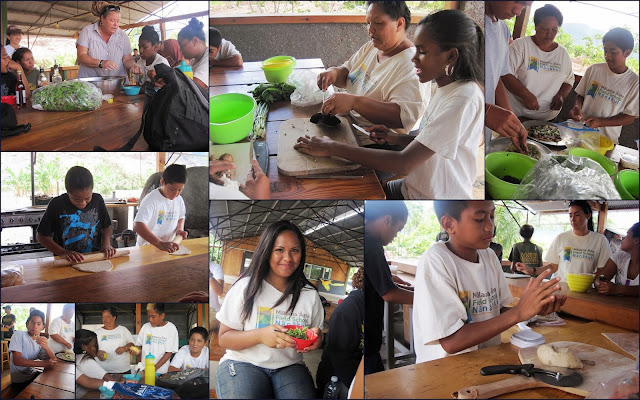 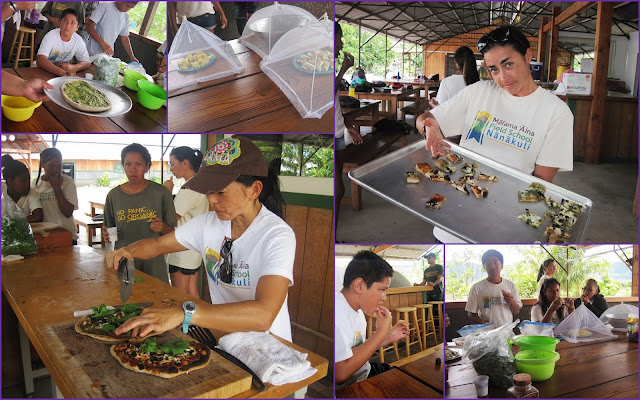 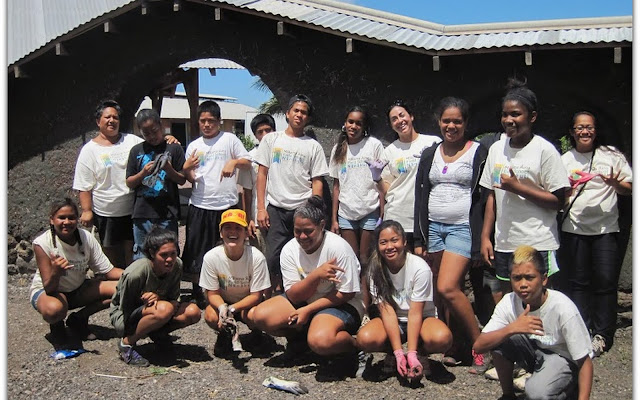 Posted by Unknown at 4:38 PM No comments:

We had a very enlightened guest who teaches at the University of Hawaii who is An associate Specialist in Soil fertility, Ph.D Jonathan Deenik. He says that Healthy and productive soils are the foundation of a secure food system. Here in Hawai'i, soils vary across the landscape, developing management strategies that maintains soil health is quite a challenge. He had us do Soil samples to monitor the Nitrogen, Ph, and Potassium levels to see how much of each is in the soil. We also got to do some research on the Soil types of the west coast which was different from all the other places on Oahu. It was a whole lot of information but very interesting to learn in such a small time but it was very useful. We enjoyed his lesson, and would be happy to learn more amazing things. Much Aloha ! 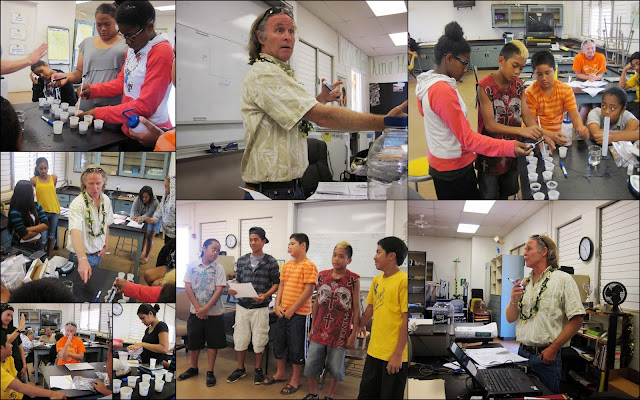 Posted by Unknown at 2:58 PM No comments:

HARC is a private non-profit organization that supports a viable agricultural sector by researching and applying relevant science and technology to achieve practical solutions and by identifying new agricultural opportunities. They are aiming to develop new technologies to help forward and sustain agriculture in Hawaii. Our speaker was a Plant molecular Biologist from Taiwan but went to University of Manoa in Plant Physiology and Agricultural engineering. She taught us how to identify the sex
determination genes in Papayas. We also got to do a DNA dance. 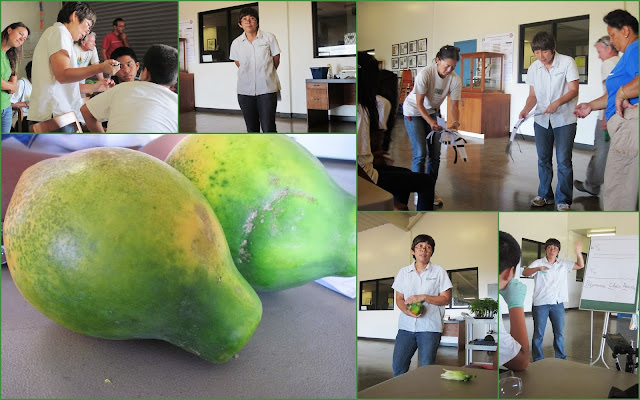 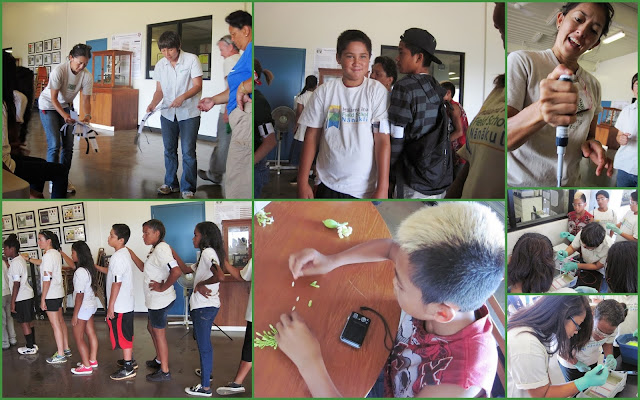 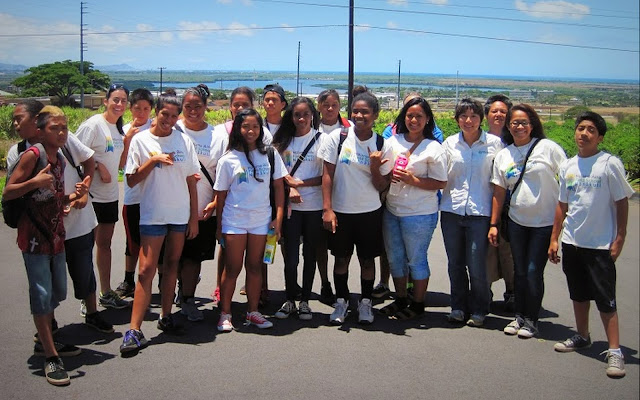 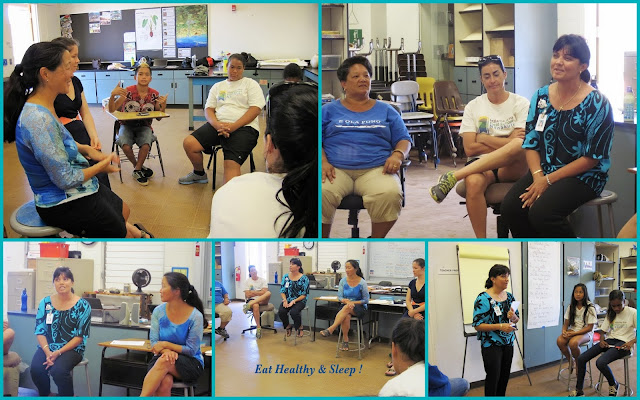 Our next guest speakers are Pediatricians and they came to talk to us about the importance of our health and how we should change it or start eating right today because most of the health problems are spreading out to teenagers like us. They gave us sheets that explained whats in the things we drink and eat that is not good for us. It is very important that we eat Breakfast and not too much Sugar. Also, SLEEP is very important :) It was a very healthy lesson. Mahalo. 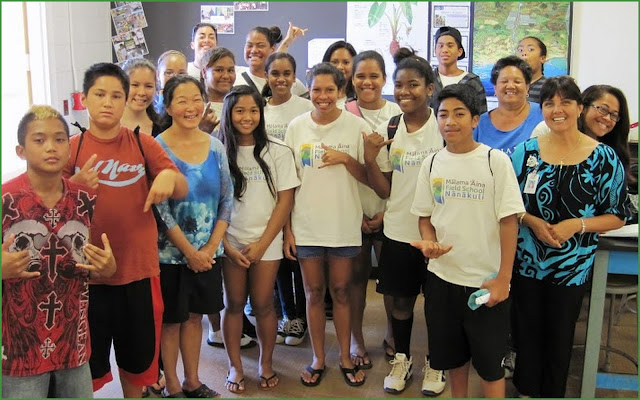